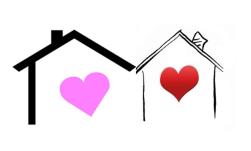 “Hey, can we talk about getting a place together?” I asked Mark one Sunday afternoon as we strolled arm in arm along a tree-lined street. The For Rent sign I spotted on a charming Craftsman house, along with the fact that my rental cottage was being sold out from under me, seemed reason enough to blurt out a question I often thought about but didn’t ask. I must have been bolstered by the fury I felt for being forced to leave the home where I had just become myself again.

I’d thrived inside those ocher walls, embracing my freedom after sending my son off to college and returning to California where I could let my hair down again. Letting go of daily motherhood meant I could swap overseeing homework for juicy make-out sessions and afternoon bubble baths with my longtime best friend who had just left his marriage.

Remarkably, my return and his divorce occurred at the same time. Although it felt more like fateful coinciding than a coincidence, we really didn’t make those choices so we could be together. I missed living in California and he was unhappily married for a very long time. Yet, once I was here and he was free, we hung out a lot.

We cooked, we laughed, we shared stories and secrets. We slept like spoons in my crooked bedroom with the leaky ceiling. Celebrating my 50th birthday with the guy I had crushed on since my twenties left me giddy with delight as I delivered kisses held back for decades.

From the beginning, Mark had been adamant that he wasn’t interested in another serious relationship. He had chosen a comfortable place for one when he left his marriage, proving he was leaving for solitude and not to live with another woman.

“We’re not a couple!” he would state that first year, completely unaware that he was hurting my feelings. Yet, his actions spoke louder than words.

He introduced me as “his best friend for thirty years,” after which he would launch into the story of how close we were since meeting at a gig he played in 1982, days after I moved to San Francisco, and how we had kept in touch for years after I moved back east in ’91. If they were still listening, he would tell how I had returned from Chicago just as he was getting divorced and that we were weaving our emails to one another into a book; the letters we wrote about raising our kids in troubled relationships, about the support we offered one another through our bouts of restlessness and search for meaning. “It’s one helluva love story,” he would say, as if just realizing that for the first time.

He really had no idea that we had been falling in love all along, that all this time together hanging out laughing, making love and sharing our hopes and fears is what being in true love is when you add it to one helluva friendship.

But I knew. Somewhere inside of me I had always known we would be together.

Then one day he introduced me as his sweetheart. Without discussion or disclaimers, it was simply the truth. No declaration of titles or change of Facebook status. The way grass seeds and dirt become a lawn, we had grown into a couple.

So, after nearly two years I thought being forced to move was a sign that it was time for us to share a home. I hated the feeling of loss I felt every time he left on Sunday night, kissing me like he was going off to war. The space he had occupied filled up with silence and the rooms felt twice as cold without him there.

When I saw that Craftsman house and asked if we could talk about living together it felt like the next step for us.

“Absolutely not,” he answered, without hesitation. “I like living alone.”

Though taken aback and a little embarrassed, deep down I wasn’t surprised. We exchanged a few words about it, then let it go, an uneasiness following us back to my place.

“I gotta go,” he said when we got there, gathering his things and dashing off without having dinner.

His call later that night settled my nerves, but I knew whatever longing I had to build a life with this man would have to be satisfied in separate dwellings, with no promise of a shared home in our future.

For as long as I’ve known him, this Cancer crab man has sought solace in his shell. “Nothing personal,” he would say, meaning it, as he left his phone off for the evening or disappeared alone into the mountains for a day or three. Solitude, it seems, was his first love.

A palm reader once turned to me, as she traced the lines of his large hands, and said, “I hope you have a lot of girlfriends, honey. You’re gonna need ’em with this one. Such a hermit, he is.”

Over time I learned that seeing solitude as a mistress to be jealous of was a perspective that only hurts me. Any suffering over his choice to be alone instead of cuddled up next to me every night was my doing, not his. Acceptance, not persuasion, would free me from my frustration.

That little house was clearly not big enough to hold us and his hermit nature, even if he had been willing to move in together. I said goodbye to my beloved cottage, found a gorgeous apartment overlooking the water and settled in.

I’m content in my own cozy hutch with every object mine and put just where I like it. It turns out the cold emptiness of my cottage had more to do with a lack of good heating than his absence.

We spend our weekends here and I often spend a night at his place during the week. He has coffee for me there and my cupboard is stocked with Earl Grey tea for him. A pair of his pajama bottoms hangs on the back of my bedroom door. “It’s all one place,” he says, at home where ever we wake up.

My mornings begin when the sun comes up, not to an alarm like the one that goes off beside his bed at 4:30am. I love the evenings I’m here alone watching The Voice, sometimes with just a glass of wine for dinner. He doesn’t even own a TV and makes elaborate meals every night.

Our travels have taken us far and wide and whether we’re in a funky apartment in Austin or a stone villa in Tuscany we happily play house in Airbnbs where commingling our stuff and our space is temporary.

His guitar sits in the corner of my living room, and like Paula in The Goodbye Girl, I don’t need to go with him when he leaves because I know he’ll be back.

“Hey, baby,” he says through a wide grin as he walks through my door, taking in the room filled with music playing, the smell of dinner cooking, and me. His leather duffle bag is slung over one shoulder and laptop bag over the other. He’s moving in for a time.

He drops his bags and kisses me. A third date kiss, long and hard, looking in my eyes with the promise of passion. He hasn’t seen me in a few days and you would think it was weeks.

Yeah, I love not living together.

We’re a couple in every way except the ones that tend to bring conflict to relationships. We share vacations, but not bank accounts; a toothbrush holder on each of our bathroom sinks, but not closet space; holidays with family, but not the raising of one together. In a crisis we are at each other’s side.

Accepting that he can love me without wanting to live together has opened the door for me to enjoy our separateness. We are partners who live apart. Apartners.

Sometimes I wish I had what other women have:  the security of marriage, someone who comes home to me at night and wakes up with me every morning. But I get to share my life with this man who adores me, who helps me see my brilliance and my flaws, who is the one I have loved for as long as I can remember. He’s not for everybody, but he’s just right for me. Feeling like I have less than other women only lasts until I remember the ways in which I have more.

Many years ago I was in California on vacation and met Mark for a glass of wine. We hadn’t seen each other in a long time. After we left the bar we walked through a suburban neighborhood, talking late into the night. Under the dark sky we quietly confessed the deeper truths of where we were in our lives, sharing our disappointment over not being where we thought we would be after passing our 40th birthdays. The youthful fantasies of future bliss that we had conjured up over wine chats in our twenties didn’t match the reality of our grown-up choices. Especially the romantic ones.

When he dropped me off he hugged me tightly and whispered, “You feel like home to me.” Maybe home isn’t really about the place we live after all.

Now, in this fifth year of us, our love and commitment have grown from the deeply rooted seedlings that started in friendship into something healthy and lush. We feel at home with each other.

In time, perhaps our address will be the same. But for now, I’ll savor our Sunday night kisses and be grateful I have plenty of girlfriends.

Lisa’s post, Two Roofs, One Home, is a Voice of the Year Honoree selection for #BlogHer17

Lisa writes about life, truth and her pursuit of acceptance. Her work has been featured in many anthologies, most recently in Crone Rising published in May 2021. She is co-author of You Are Loved...an email memoir with her partner, Mark Mathias. They share a home in New Mexico. Her memoir, Ashes to Ink, was published in October 2021.
View all posts by Lisa Lucca →
This entry was posted in Love, self acceptance and tagged acceptance, apartners, Love, midlife women, relationships, unconditional love. Bookmark the permalink.

10 Responses to Two Roofs, One Home